Message from DG of WAHO on the Occasion of African Traditional Medicine Day, 31 August 2019

Message from DG of WAHO on the Occasion of African Traditional Medicine Day, 31 August 2019

The chosen theme for this year, "Integration of Traditional Medicine into the Curriculum of Health Sciences Students in Universities in the African Region", is very timely given the numerous efforts being made across the continent to promote this important, but long neglected sector. The continent’s future health professionals, especially medical doctors need to understand the fundamentals of traditional medicine which is widely used by a large proportion of the population, particularly rural dwellers.

This year’s celebration is therefore an exhortation to African countries to foster collaboration between key stakeholders, highlight the immense benefits of African Traditional Medicine, and ultimately improve access to Universal Health Care across the continent.

Today, we at WAHO have every reason to be proud of our modest contributions to promoting rational Traditional Medicine practices in the ECOWAS region. Over the past 12 years, Traditional Medicine has been one of our priority programs, and we have worked strenuously with ECOWAS Member States to implement a wide range of interventions. These include:

Having Traditional Medicine among the priority programs of WAHO marks ECOWAS as the first Regional Economic block in Africa to take concrete steps towards the attainment of the Alma-Ata Declaration of 1978 that called on member states of the World Health Organization (WHO) to include Traditional Medicine in their primary health systems and to recognize traditional medicine practitioners as health care providers. Several institutions in our West Africa region have already introduced the WAHO training program on Traditional Medicine into their undergraduate medical curricula, and some have established their own unique training programs. For example, the Kwame Nkrumah University of Science and Technology in Kumasi, Ghana, established a Bachelor of Science Degree in Herbal Medicine in 2001 to train Medical Herbalists. In 1987, Nigeria established the National Institute for Pharmaceutical Research and Development (NIPRD) as a parastatal under the Federal Ministry of Science and Technology, with the primary objective of developing drugs, biological products and pharmaceutical raw materials from indigenous resources. Countries such as Burkina Faso, Cote d’Ivoire and Mali have taken an equally innovative approach by teaching their undergraduate medical students some aspects of Traditional Medicine, with some final year students making it the focus of their theses.

However, despite these efforts, huge challenges remain. With the urgent need for Member States to strengthen their health systems through the provision of modern infrastructure, expensive equipment and enabling health technologies, it is a huge challenge to also provide adequate resources for developing Traditional Medicine. The sector is therefore underfunded, the regulatory framework is weak, and there are inadequate mechanisms for controlling the safety, efficacy and quality of Traditional Medicine products. In addition there is an urgent need to improve our poor manufacturing practices, increase support for Traditional Medicine research and development, and introduce conservation methods to prevent high rates of deforestation with its environmental consequences. Addressing these challenges will go a long way to reduce the proliferation of quacks and unwholesome practices that negatively impact vulnerable populations.

WAHO’s challenge to ECOWAS Member States on the 2019 Africa Traditional Medicine Day is that each country should rededicate itself to honoring the key international obligations and commitments they signed up to, notably:

On the occasion of the 17th African Traditional Medicine Day, I salute the Traditional Medicine Practitioners of our ECOWAS region and all the stakeholders, both State and non-State actors, who have championed and supported the promotion of the sector. May we all redouble our collaborative efforts towards better healthcare for our people. 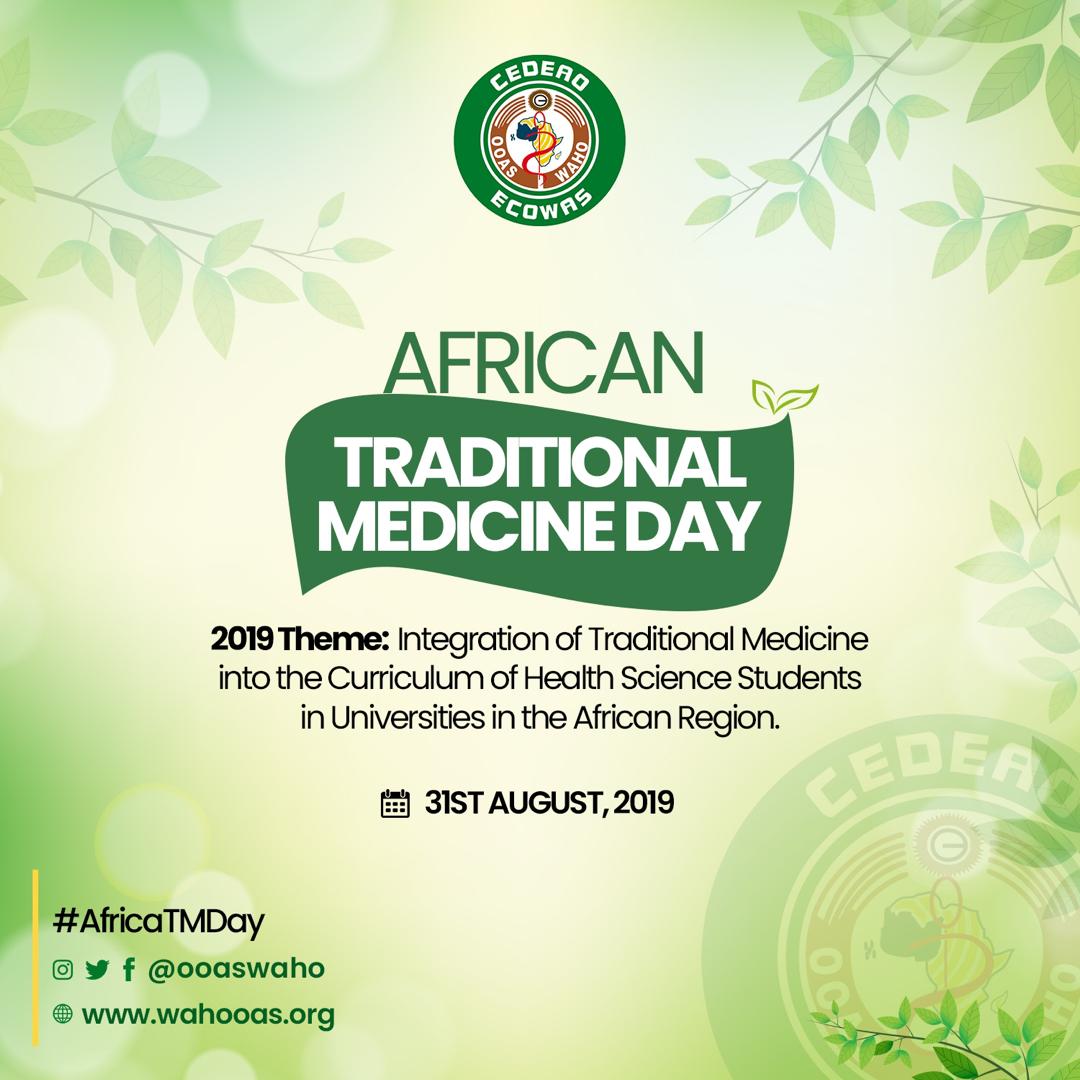