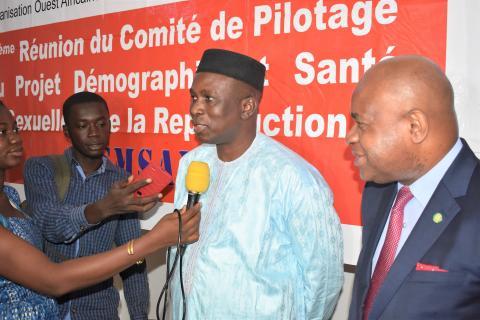 The West African Health Organization (WAHO) organized in collaboration with the French Development Agency (AFD) the third meeting of the Steering Committee of the Demography and Sexual and Reproductive Health Project (DEMSAN) on April 26, 2019 in Azalai Grand Hotel of Bamako, Mali.

The objectives of the meeting were to review the physical and financial performance of the project during the second year, to discuss the difficulties encountered and to approve the 2019 Workplan.

The opening ceremony was presided over by the Secretary General of the Ministry of Health and Public Hygiene of Mali, who was joined by the Deputy Country Director of AFD in Mali and the Director General of WAHO.

AFD's Deputy Country Director in Mali, André Romain, reassured the audience of AFD's support to address the various demographic challenges. He described the context of the DEMSAN project and invited all stakeholders in the region, including WAHO, to innovate and adapt working methods to make services available and ensure access to family planning. Mr. André, as the first person in charge and initiator of the regional program at AFD, was delighted with the successful implementation of the DEMSAN project activities. He congratulated the actors involved in the implementation and expressed the hope to see the project grow.

The Director General of WAHO, Prof. Stanley Okolo, in his welcome address, expressed his gratitude to the highest authorities of Mali and more particularly to the Secretary General, for accepting to host this important meeting in Bamako and for his presence at this ceremony despite his busy schedule. He also expressed his gratitude to Mr. ANDRE Romain, Deputy Country Director of AFD in Mali for his presence, which shows the great interest that his Agency is showing in the DEMSAN Project Steering Committee meeting. He then recalled the objectives of the DEMSAN project, some achievements in the second year of implementation and the objectives assigned to the Steering Committee. Professor Okolo thus reiterated his thanks and gratitude to AFD, which kindly provided financial support of 10 million euros over a period of 4 years to accelerate demographic transitions in the ECOWAS region. He recalled the support provided to Mali in 2018 by the project and hoped that questions would always be asked about the involvement of communities and the sustainability of the achievements. After thanking the press, he challenged them to continue the ongoing education of the population in order to accelerate behavioral change. He concluded by thanking the various delegations for their effective presence at this important meeting and wished them every success in their work.

In his opening address, Mr. Coumare Mama, Secretary General of the Ministry of Health and Public Hygiene of Mali, thanked WAHO for choosing Mali to host this third meeting of the Steering Committee of the Demography and Sexual and Reproductive Health Project (DEMSAN). He reassured the participants that Mali fully supports the DEMSAN project, whose objectives are in line with the population policy program of His Excellency Ibrahim Boubacar Keita, President of the Republic and Head of State. He recalled Mali's challenges in terms of population policy in view of its rapidly growing population and very high total fertility rate. He reiterated his sincere thanks to the technical and financial partners for their support as well as to WAHO and civil society organizations working to improve sexual and reproductive health in the region. He declared open the work of the 3rd Meeting of the Steering Committee of the DEMSAN Project and wished the delegations fruitful deliberations.

Technical discussion was led by the Chairman of the Committee in the person of Professor Stanley OKOLO, Director General of WAHO.

The Steering Committee assessed the results obtained by the project in 2018 and discussed the recommendations proposed by the technical committee.